Born in Brussels to a Belgian mother and a Japanese father, Mina KANTO was destined to create bridges between people and cultures.

Soon she discovered her preferred means of communication: through music and rhythm, which manifested itself in African percussion, thanks to the renowned Mamady Keita.

In 1997, she made a leap and joined the Jazz Studio in Antwerp to study for 2 years under the tutelage of Johan Joris and Chris Joris. Mina continued her way this time in Havana (Cuba) where in 1999 she was admitted to the ENA (Escuela Nacional de Artes). For the next 2 years she studied Cuban and Afro-Cuban percussion with some of the most important percussionists around, such as Yaroldy Abreu and Ambraham Mansfaroll. More recently, she worked with the great master of Afro-Peruvian percussion, Gigio Parodi and trained in Korean percussion with Myung-Hyun Park. Her recent trips to Korea pushes to deepen her knowledge of Korean percussion via the school of Samul Nori Lee Kwang-Soo master.

In Belgium, she continued to expand her artistic horizons by collaborating with musicians, dancers, storytellers and in musical projects of all sorts.

Her musical collaborations have taken her from Brazilian Maracatu to the Cuban Comparsa and Colombian Cumbia, Japanese percussion sounds, salsa, Moroccan Gnawa and many more.

It is her insatiable appetite for music and culture from around the world that propels her to seek new discoveries and experiences.

Her professional experiences with Les Jeunesses Musicales, entertainer at the Musée des Enfants (storytelling, theater and other artistic disciplines), the Petits Débrouillards and her percussion workshops for children led her to create shows entirely dedicated to a young audience. Her first show, The Fabulous Adventure of Pâtisson, is a musical tale. The second one, The Goofy Stories of Lady Spirella, is a set of rhythmic, interactive and participative tales.

In 2014, she created her traveling rhythm school and offered workshops to schools and holiday centers focusing on the Cajon (rhythm box), body percussion, vocal rhythm techniques such as the beat box and vocal traditions of rhythms of the world.

To listen some compositions of Mina Kanto, click here. 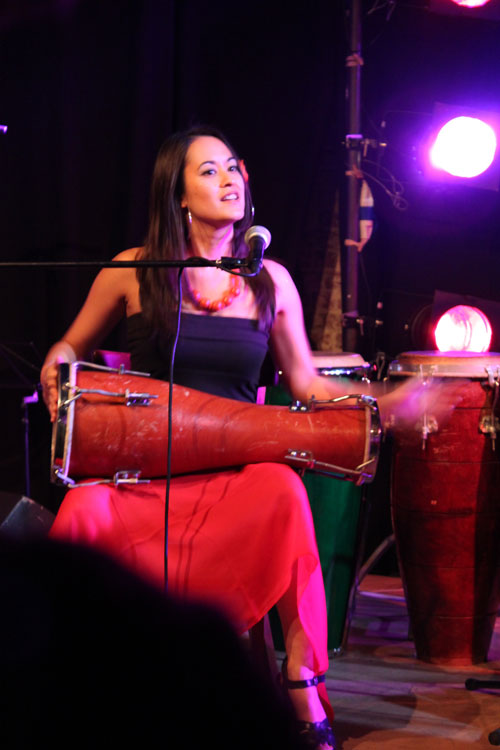