Afro-Peruvian percussion comes from the Peruvian communities of African origin.

The community is still little known in Europe.

The community grew out of the trading of African slaves who arrived in Peru — around the sixteenth century — to replace the native workforce working in the gold and silver mines.

However, the altitude made conditions very difficult for the slaves to survive and so they were later sent to work in the cotton and sugar cane trade along the Pacific Ocean coast.

This community is now settled on the coat of Peru, especially in Lima and Chincha (about 200 km south of Lima), which is one of the country's most important cultural centres.

Apparently, the cajon was the first percussion instrument. Initially, the cajon was just the wooden box used for fruit picking turned upside down. The translation of 'cajon' from the Spanish 'caja' means 'box' in English.

We found many of these on the plantations where many slaves worked.

These 'cajones' began to appear possibly due to the banning on playing drums. The authorities did not mind these 'cajones' as they were not real drums.

The plantation owners, forbade the slaves to practise their religious rites (in which drums were very important) and forbade them to continue their musical culture in order to suppress any form of rebellion.

The history of African slaves in the Americas showed that they have always managed to find a way to keep their musical traditions and even to assimilate them with local influences, eventually to offer the world the music that we listen to today.

The Cajon, this simple box, however has itself an ancestor in the form of a hallowed gourd open on one side (calabash), the 'Checo', and it was used in colonial times as the unit of corn.

It was with the help of tools that it was turned into a musical instrument. 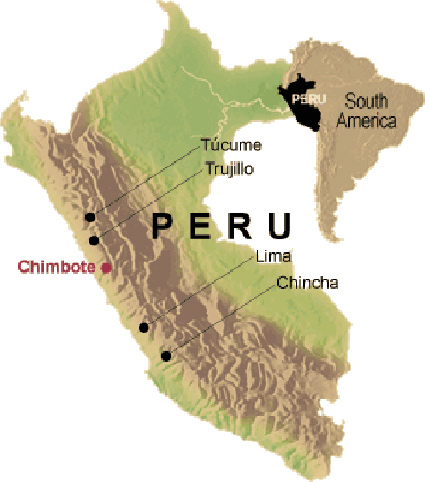 The Cajon is a simple box that you sit on and use as an instruments by hitting the surface with your hands. This instrument takes a huge part in the Afro-Peruvian music.

Alongside the Cajon, other instruments have been developed or altered to create other elements to Afro-Peruvian percussion:

Across centuries, dance and music have gone hand in hand, practised by Black people such as Lundu or Zana and accompanied by a variety of instruments of fortune and were crossbred once in contact with the Hispanic and Indian cultures. In turn, they gave birth to Afro-Peruvian dances such as the current Marinera, Vals, Zamacueca, Inga, Lando or Festejo the Peruvian Cajon rhythm.

Contemporary Afro-Peruvian percussion are a mixture of impressive polyrhythmic sounds and they are prone to constant change.

One can appreciate the music of artists such as: Peru Negro, Chocolate, Eva Ayllon, Arturo Zambo Cavero and many others.

During the 70's at a tour in Latin America, the famous flamenco guitar player, Paco de Lucia, was amazed by the Cajon's sonority and rhythm. He introduced the instrument in the flamenco and become rapidly one of the official instruments of the Flamenco.

The Cajon, with or without its snare can be found in all musical styles, such as in jazz, fusion music, world music, funk, etc.

We can also notice the presence of the Cajon in Afro-Cuban music. It has a trapezoidal shape. it is open at the bottom and is often wedged between the knees when played. It is mainly played for Rumba and Guarapachangeo.

The reco-reco is a Brazilian percussion instrument from the family of idiophones scratched or scraped. It is an instrument of accompaniment.

The Guïro is a musical instrument from the family of idiophones, common in Cuba and Puerto Rico, and consists of a scraper with drilled holes in which the numb and middle finger are going onto.

The melodic pattern constitutes a basic rhythmic pattern. It is a repetitive pattern that can be used with any scale. It is the most frequently used in terms of percussion instruments but it can be used to every instrument that has a rhythmic part (bass guitar, piano, etc).